The project I worked on the last 5 weeks of the minor. 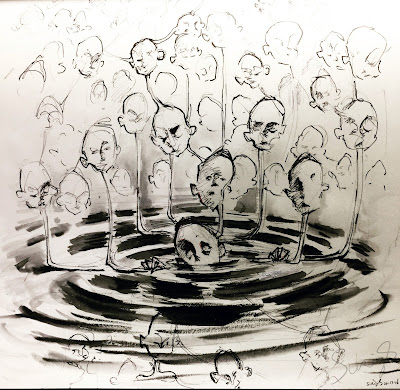 What started as a research on the subject of identity, eventually became more about answering a very personal question: "Who am I (at this very moment)?" but also "What has formed my sense of I?"
___________________

I didn't really know what I wanted to make when I started this project. Everything's a medium and can be used to tell a story I learnt during my minor. So did I want to make an animation? or not?.. I only knew that I wanted to research the subject of "identity" as I felt like my sense of I had changed in a really short amount of time, probably due to subjecting myself to quite a lot of new experiences, and meeting new people. I didn't feel like """the old me""" anymore. "Who am I?" and other questions arose. Basically I was having an identity crisis. I didn't know whether that was good or bad, but being aware that I was changing, and not knowing anymore where I was going, or where I wanted to go (and the anxiety that comes along with that) really drove this project.

So what made me feel like I was changing, in the first place? The outside world. Every setting we step into, every person we meet, has the potential to change and shape us in a profound way.

Based on that thought, I went onto the streets and let people draw/write on me what their unique characteristics are. As a metaphor for the environment that literally "shapes" me/us. 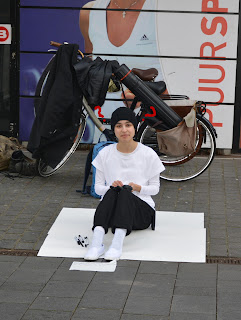 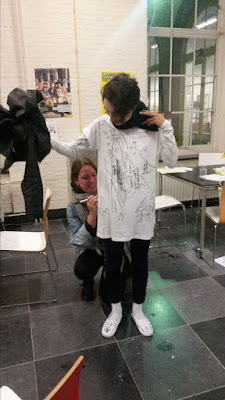 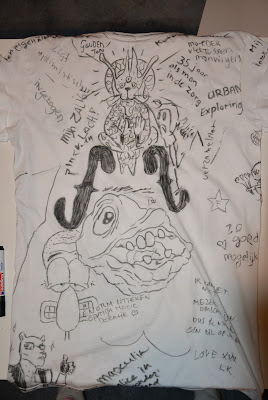 I wanted my friends to draw on me (as they obviously shaped me), but also strangers to see what meaningful experiences might arise from that. So I also did this in the city centre and other locations.

So I had all these clothes now and indeed, met a person on the street who I will not forget thanks to this little experiment.  But as happy as I was with all these drawings/writings I didn't have anything to go on to continue my research, except the extreme awareness I had, of how differently I behaved in each setting. Quite obvious, as we all play different roles depending on the setting/person.. but
it really made me think which one of those 'roles' I play is the real me? is the authentic me? When am I most 'myself'?

so I did some research on Jung's "persona" and Winnicott's "false self" & "true self": "Winnicott used true self to describe a sense of self based on spontaneous authentic experience, and a feeling of being alive, having a real self." ...

So if the “true self” is a sense of self based on spontaneous authentic experience, I have to seek these kind of experiences out, right?

I found inspiration in the automatic writings of the Surrealists and decided to have "automatic dialogues" with people for my next experiment:
a one-to-one dialogue with different people, where we let our “subconscious” speak. I say one word, and someone else says another word right after that; speaking whatever comes to our minds without stopping to think first.
I was also curious to find out where my words (and the words of others) come from. As I was also extremely aware during this period that everything I say, is a collection of words I heard before from others. The way I speak, my mannerisms, are all a combination of the traits of people I have met/seen before.

A friend of mine came with the suggestion to only film the eyes, so I did. And after looking at all the different dialogues I was struck by the eyes, and how they seem to look around and search continuously (for the right words to say?). 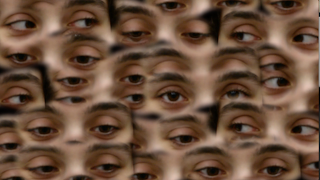 Then I put all the eyes together in one movie and the result struck me once more, the looking around fascinated me so much probably because I was also continuously looking around for “who I am” or "who I want to be", I guess.

I then did more research and stumbled onto Erik Erikson’s Psychosocial Stages of Development, and Marcia’s Identity Statuses. There was one stage of identity development that resonated with me:
"Identity Moratorium – the status in which the adolescent is currently in a crisis, exploring various commitments and is ready to make choices, but has not made a commitment to these choices yet."

So I had found my focus points for my story:
-"Identity moratorium: The status of a person who is actively involved in exploring different identities but has not made a commitment."
- there is no final endpoint in identity development.
- and we’re shaped by our environment

So with these focus points, I did some visual research, how can I communicate this? I was visually really interested in “fragmentation”, and the taking on of many different forms. Continuous change. and I thought it would be good to try out projection mapping again as the way it can transform anything you project on, seemed suitable. 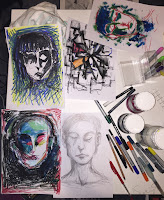 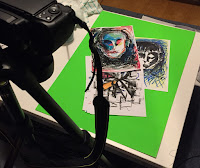 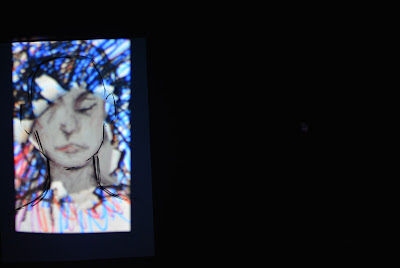 And then I beamed this looping animation onto a piece of paper which I had stuck to my wall. But it wasn't really telling a story...

---
So I did more experiments where I even used live footage of myself, but I didn't want to focus so much on myself in my work.. 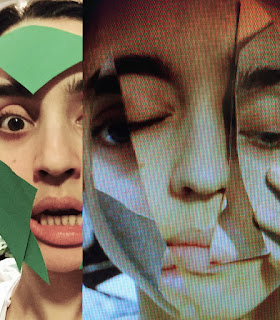 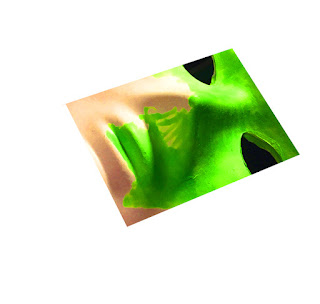 .....
and I missed the interaction I had with others during the early parts of my process. Plus I was curious how others feel about their identity, and if they are going through/or went through the same thing I’m going through at the moment.


So I had all this footage, and now I just played around with it:

and experimented with what surface I could project on: 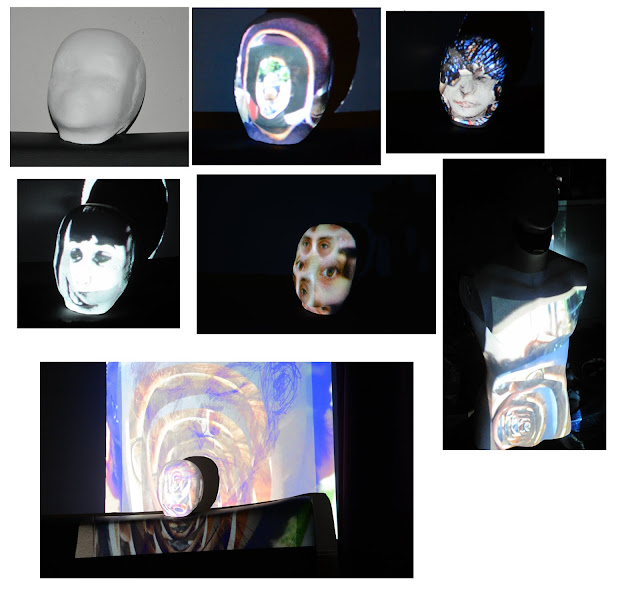 And what would I do with the audio?
Well, I had some really great conversations with the others, and some people told me things that really touched me and I could identify with... it was kind of like I was discovering myself again during the interviews... It made things clearer about who I was, am, and where I’m going. So I decided to answer the question of who I am by rearranging the audio in such a way that the others seemingly tell my story, of who I was/am and where I’m going. Who I am, and where I’m going will always (in a way) be influenced by the people around me, anyway.

In the end I also simplified the visuals, as all the details were too distracting: 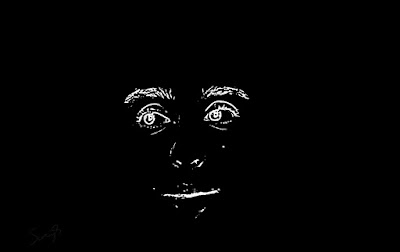 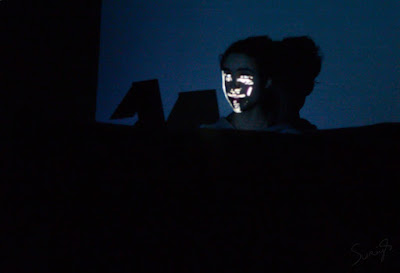 ..but the message I wanted to convey (how WE are ALL shaped by our environment, and continuously changing) didn't work this way (plus it was boring to look at/listen to) so...

The final work:
Based on the interviews I did with people, I eventually projected the videoportrait(s) onto a mirror + let the audience listen to the interviews. When seated, the viewer would see their own face in the mirror, with the faces of others layered on top of their own. 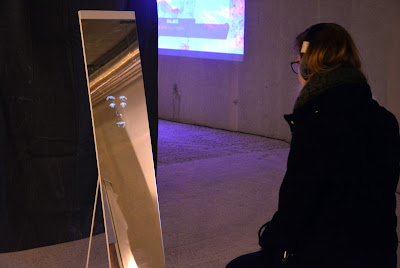 excerpt from Flux (full version is around 4 minutes)


The reason I named this project "Flux" is because the conclusion I came to, after this little research, is that (my) identity is fluid. Quite obvious of course, but when I was younger I had a fixed idea of who I was, who I am, and who I would become.(or who people told I was, am, and should/will become. To be more precise..) But our (sense of) self constantly changes as we move on in life and meet new people, and that's what I wanted to convey to others (and to myself) with this project.
And through this project I finally accepted that as a natural part of life, instead of fighting it, I suppose. So it's been a valuable experience.